Today, we are featuring The Captain of Her Fate, a saucy and sophisticated Regency romance by Nina Mason, the author of Devil in Duke’s Clothing and The Governess Next Door, among many other books.

Captain Theobald Raynalds lost his leg at the Battle of Trafalgar and with it, his belief any woman could find a cripple like him unobjectionable enough to love.

Louisa Bennet finds Theo incredibly attractive—both as a man in his own right and as an alternative to the odious cousin her father has arranged for her to marry.

First, however, she must convince the Captain her interest in him stems from the man he is, scars and all, and not on his being the lesser of evils.

Here are the links:

Buy it now on Amazon

Add it to your TBR lit at Goodreads 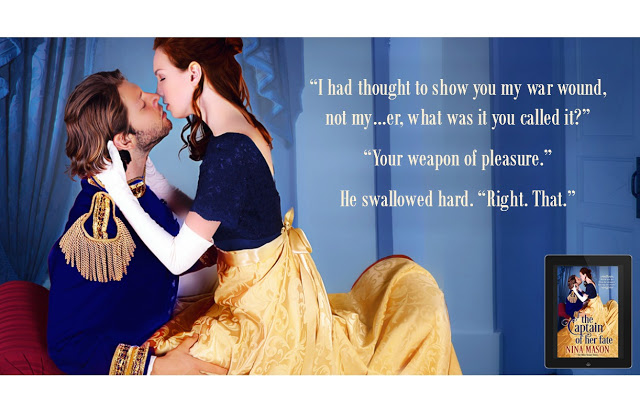 After the Captain’s sister quit the room, Louisa took her advice and dozed until a knock on her bedchamber door brought her back to herself. Just as she opened her mouth to ask who was there, Capt. Raynalds called through the door, “Miss Bennet, may I have a word?”

She hesitated before answering. As desperately as she wanted to see him and hear what he came to say, her sense of propriety told her to refuse him entry. Entertaining a gentleman in her bedchamber was shockingly improper. Under the circumstances, however, she could not bring herself to send him away.

Pulling the bedclothes to her chin to cover the sheer nightgown his sister had loaned her, she said, “Yes, Captain. You may enter.”

He opened the door and, with the aid of his cane, limped to the bedside and looked down at her, his expression inexplicably stern. “Does my sister speak the truth?”

The question at once shocked Louisa’s heart and aroused her fury. She could not decide which she would rather do, curl up and die or strangle his sister with her bare hands. How could the girl betray her confidence by telling her brother her plans?—if, indeed, that was what she had disclosed. Perhaps it was not, in which case, Louisa would be wise to tread carefully to avoid betraying her own secrets (and his trust in the process).

She blinked under his probing stare. “How can I answer that when I have no idea what she might have told you?

“She told me your father intends to marry you off to a man you despise.”

He looked very unhappy, which pleased her immeasurably. “Yes, that is true. He wants me to marry the cousin to whom his estate is entailed—to ensure my mother and sisters will have somewhere to live after he departs this world.”

The Captain, hands stacked atop his cane, shifted his stance uneasily. “I can understand his motives—he is only doing what he believes best for his family, one can only presume—but I cannot agree with his forcing you to marry a man you abhor. Does he know how much you loathe your cousin?”

“And he insists upon you marrying this man in spite of your feelings?”

“My feelings are of little consequence to my father, I assure you.”

He scrubbed a hand down his face. “Surely there must be some way around marrying this person.”

Did she dare share her idea? No, she mustn’t. If she did, he would never come to trust her. “There is not, short of running away and living as a gypsy.”

He stood there a long time, as if fighting an inner battle. At length, he said, “There is one way I can think of…but I fear I am not the man for the job.”

Louisa’s heart wilted. “You are right. We are strangers. So why should you care what becomes of me?”

Softening in demeanor, he came closer and sat beside her on the bed. “I do care what becomes of you, Miss Bennet—beyond what I am willing to admit—but my heart is not quite invested enough to put a ring on your finger. Neither is my trust. And now, in addition to my standard reservations, I suspect you mean to use me to avoid marrying this cousin of yours.”

“That is untrue!” She looked away so he would not see the desperation in her eyes. “Well, it might be partially true…but I shall endeavor to fall in love with you as soon as I’m able.”

He smiled at her sympathetically. “Forgive me. I by no means wish you unhappy. Truly, I do not. But neither can I consent to binding myself to a woman on the off-chance she will fall in love with me.”

Turning away from her, he said, with an indignant edge to his voice, “That is supremely unfair, Miss Bennet. Have I not helped you already? Did I not come to your aid when you fell off your horse? Did I not take you in when your own mother left you to my care? Have I not kept my distance to protect you from scandal and ruin?”

The last bit astonished her. Did he really fear what might happen if they were alone together? Were that indeed the case, she might exploit his passions to aid her cause. Much as she hated to resort to such deceitful measures, she could see no other way to escape her marriage to Charles. And it would not be entirely an act; for just now, with him sitting so near, so dangerously near, she wanted nothing more than to be in his arms.

Here’s the Review by Sue Ellen

This is the first historical romance that the author has brought to her readers and I must say that I truly enjoyed the book. Her descriptions allow us to fully understand what is going on with the story and also her characters. She takes you to a time when women were supposed to be angelic, obedient, and forced into marriages not of their choosing. Louisa is one of these women that was born during this time; however, she does not follow the rules. She will go through all odds to get what she wants and keep what was doomed as her faith by the family from happening. The author brings you a woman who is strong, makes up her own mind, and will follow her heart no matter what others say. She sees a person for who they truly are inside and not by a physical appearance. Theo is a man that has endured physical pain from the war and then emotional pain when the woman he loved is repulsed by him. He has a big heart and will do anything for those he loves. He has shut himself off from woman. How will a man whose heart turned cold melt? One thing I love about the book is how the author will take you for a spin with her twists. The novel is smooth to read and a page turner for sure. You can tell that this author takes her research and novels seriously because the time fitting and characters characteristics during those times were executed amazingly. I would definitely recommend this to anyone that is looking for a Historical romance with a twist. I will be hoping the second in this new series comes quickly. 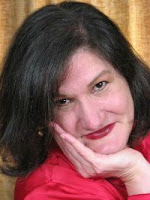 Nina Mason, the author of eleven published books to date, is an incurable romantic who strives to write love stories that entertain and edify. A research fanatic, she goes to great lengths to ensure the locations and time periods in her books are accurately portrayed (and thanks the Powers That Be for the internet). Born and raised in Southern California, Ms. Mason lived in Oregon briefly before moving to Georgia, where she lives with her husband and college-bound daughter. When she isn’t writing, she makes historic dolls, fairy babies, and putters in her garden.