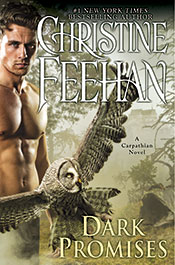 Lovers challenge destiny and risk their lives in the new Carpathian novel by the #1 New York Times bestselling “queen of paranormal romance.”*

Gabrielle has had enough of battles, of wars, of seeing the man she’s engaged to nearly lose his life when it isn’t even his fight. Once Gary was a gentle and very human researcher. Now he’s a fearless and lethal Carpathian warrior with the blood of an ancient lineage coursing through his veins—a man Gabrielle still needs and dreams of with every breath she takes. All she wants is a life far away from the Carpathian mountains, far from vampires and the shadows cast by the crumbling monastery that hides so many terrible secrets. But Gabrielle soon learns that promises made in the dark can pierce the heart like a dagger.

Trixie Joanes has come to the Carpathian mountains in search of her wayward granddaughter, fearing that she has been lured there by something unspeakable. Instead, Trixie has stumbled onto the path of a desperate woman on the run. And they’re all fated for the lair of a mysterious ancient with revenge in his soul and the undying power to make bad dreams come true.

****** This review does have some SLIGHT SPOILERS but if you read the book blurb,you can read between the lines of what is going on in the book. It is just elaborating on that. ******

Wow! That is the best word to describe Dark Promises! This is truly Christine Feehan at her finest! I was an emotional wreck while reading this one! I’m not kidding! Big wet tears! I never seen it coming! My mind was screaming and crying, “Why!! How can this be”!!  It’s completely not where I thought their journey was headed but I grew to love the new spin, and I can see why things developed as they did. My heart hurts for all the Carpathians that have yet to find their lifemate, but Gary is just tearing me up inside!
Gabrielle has loved Gary Jansen for a long time. He made her feel safe when her world was falling apart. When she was turned Carpathian to save her life years ago, she put her human dreams to the side to help research solutions to their problems. She has held on to her humanity and hasn’t accepted her new life. She doesn’t like change and nothing will ever be the same again.  Now that Gary is fully Carpathian, their should be nothing to stand in their way of finally being together. Except, something neither of them can control … fate.
Even though your heart will be breaking at one point, keep reading. I can understand why it all changed. Gabrielle and Gary may end up leading separate paths but he will always be in her heart.
Aleksei is one of my favorite Carpathian males yet!  He is ancient, dominate, deadly and on the very edge of darkness but has chosen the honorable path. When he hears his lifemate cry for another male, all bets are off and he succumbs to his dark side. He has endured for so long just to find she loves another. He has no intention of sharing any part of her, and he goes extreme alpha male on her! He is exactly the kind of man Gabrielle needs and he is determined to show her all the ways they can be great together.  Aleksei ignites a hunger in Gabrielle that she never dreamed was possible.  She is feeling so many different emotions so fast, but she knows Aleksei is what she needs. He is who, she wants to spend her life with. She is tormented over how things ended up with Gary and she wants to make it right with him but also not hurt Aleksei in the process.  Together they have a lot to over come and there are enemies seeking to destroy their newfound hope.  We also have Trixie to brighten things up!  She was awesome! Hilarious! I loved her! Vampire hunting kit and all! I liked seeing her over come her insecurities about her age and her lifemate was perfect for her. I really loved seeing their relationship grow! If anyone deserved happiness it was her!
Teagan, Trixie and Gabrielle are fast friends and together they will give hope to all the Carpathians!
I loved every minute of this book and hated to see it end! The thrilling blend of dark passion and all consuming love will leave you breathless! Again I will say this is Christine Feehan at her finest!
I received an ARC for an honest review 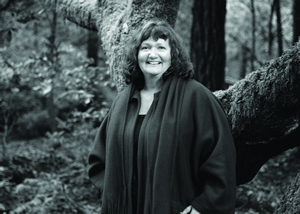 #1 New York Times bestselling author Christine Feehan has over 40 novels published, including four series. Each of her four series has hit #1 on the NY Times. Her debut novel Dark Prince received 3 of the 9 Paranormal Excellence Awards in Romantic Literature for 1999. Since then she has been published by Leisure Books, Pocket Books, and currently is writing for Berkley/Jove. She also has earned 7 more PEARL awards.

She is pleased to have made numerous bestseller lists including the New York Times, Publishers Weekly, USA Today, Bookscan, B. Daltons, Amazon, Barnes and Nobles, Waldenbooks, Ingrams, Borders, Rhapsody Book Club, Washington Post, and Walmart. She has received numerous honors throughout her career including being a nominee for the RWA’s RITA. She has received a Career Achievement Award from Romantic Times and the Borders 2008 Lifetime Achievement Award.

She has been published in multiple languages and in many formats, including large print, palm pilot, e-book, and hardcover. In October of 2007 her first manga comic, Dark Hunger was released in stores. This was the first ever manga comic released by Berkley Publishing and it made #11 on Publisher’s Weekly Bestseller’s List. Her ground-breaking book trailer commercials have been shown on TV and in the movie theaters. She has been featured on local TV, appeared on the The Montel Williams Show, and her book Dark Legend was featured on the cover of Romantic Times Magazine.