Master of No One

Aleksander is short-tempered, antisocial and though he’s unaware of it, wildly sexy. He’s also a naturally dominant shape-shifting monster who’s sliding into madness. He needs a human ‘grounder’ to submit to him and draw forth his protective human side. Instead he is given two humans: Constance, a fledgling sub with a reckless streak whose intense desire to serve has brought her nothing but heartache, and Kirk, a former NYPD cop who’s trying to subdue his own alpha instincts and play submissive in order to fulfill a family debt.

But once these grounders meet their new master, they quickly discover that in order to save Aleksander from himself, they must alter their assigned roles and form a unique triad of domination and submission that goes against Aleksander’s very nature. Constance needs to convince Aleksander he can be gentle and protective, while Kirk wants to show him there is freedom in surrendering to another dominant. The task isn’t easy, though: Aleksander fights them every step of the way, and a conspiracy surfaces which not even a creature as powerful as Aleksander may be able to overcome.

Kirk needed sleep—in a bed, not in a chair—but lying down and closing his eyes felt like an impossible feat while the sounds of Constance and Aleksander together in the bathroom continued to ring in his ears. He’d gotten up to take a piss and taken a peek down the hallway, just in case. The sight of the open workroom door had led him to investigate, tracking sounds that eventually led him to the master bathroom. There, he had stood, ear to door, hand cupped over his groin, as he listened to something incredible.

He could have guessed that Constance would sound beautiful in the midst of sex. There was a lushness about her and an openness in her responses during conversation that had hinted she would be not only loud in bed, but completely uninhibited. Standing against the door, shamelessly eavesdropping, he’d been glad to be proven right. He hoped he’d get his chance to coax those sounds from her too.

The surprise had been Aleksander. Even now, as he tiredly dragged on a pair of jeans, Kirk didn’t know what to think about his reaction to the noises the chimera had made. At first, he had convinced himself it was Constance alone he was being turned on by. Kirk had watched plenty of porn and learned to block out whatever the male star was doing and saying on screen and focus on the woman. He thought he’d been doing that in this case, until Aleksander emitted a desperate-sounding gasp, his voice nearly breaking, and Kirk’s cock had twitched violently in his hand as if it were a striking snake. After that he’d given up the pretense that he wasn’t listening to both of them, and to his pleasure it had made the experience ten times better.

“So I get off on the sound of a guy having sex with a beautiful woman,” he mused aloud. He shrugged, figuring as far as sexual triggers went, there were worse.

But it was more than that, wasn’t it? When Constance had emerged from the bathroom, flushed and fuckable, Kirk had wanted her, of course, but he’d wanted something more. He’d heard the tell-tale sounds of a blowjob and recognized Constance’s red, puffy lips for the evidence that they were. A hunger had seized hold of Kirk to taste her, but he couldn’t deny that when his tongue delved inside her mouth he’d gone looking for another taste as well. Call it curiosity. And when he’d found that salty, slightly bitter tang he’d felt a lightning bolt of forbidden lust strike him.

What did it all mean? Maybe something. Maybe nothing. Kirk wasn’t one for self-analyzing. Actions spoke louder than thoughts in his world. He’d let this one play out.

He scrubbed at his hair as he headed for the kitchen, planning on a glass of milk before trying to hit the hay again. His body was energized but gradually winding down, as if he’d just completed a long run. He was going to sleep like the dead when he was finally able to shut his eyes and relax.

It wouldn’t be that easy, he discovered upon entering the kitchen.

Aleksander looked up from the tall glass that he’d been contemplating. It appeared to contain a thick shake. His hair was damp. Worse, he appeared to be naked save for the towel wrapped carelessly around his hips. But he looked better, the best Kirk had seen him yet.

“Hey,” Kirk greeted him, pausing with the kitchen island between them. He yawned for effect. “Just getting some milk before I hit the sack.”

“Recent exertions tiring you?” Aleksander asked. There was a wicked gleam in his eyes that Kirk found intriguing.

“Something like that,” Kirk said with a smirk. “You look better.”

Aleksander’s expression washed neutral. “Constance told me you entered my room without my permission again.”

“If you’re asking if I saved your life, the answer is yes.”

He earned a glare for that one, but it was worth it.

“I didn’t ask you to,” the chimera growled softly.

“Maybe not. But Constance would have been disappointed if I’d let you die. Probably a lot of other people and creatures would be too. You’re a popular guy.”

The comment appeared to irritate him, prompting Aleksander to drink from his glass. “Thank you,” he mumbled against its rim.

Aleksander huffed. “That’s right. You told Michel you’re my grounder. Interesting strategy putting yourself in an immediate position of inferiority against him.”

“Is it inferior? I got the impression a grounder is the only thing that’s going to keep you from falling apart.” Kirk smiled as the other male clenched his jaw. “Seems like a pretty important role, if you ask me.”

“And how do you expect to fulfill your role?”

Kirk idly adjusted the fit of his jeans, hoping Aleksander hadn’t noticed that they’d begun to grow tight in the crotch. Something about Aleksander got him going. Maybe it was the attitude, which seemed to be a prerequisite amongst chimera. It made Kirk want to take him down a peg and stand over him after he’d fallen.

Nothing like some homoerotic imagery there, he chided himself.

Aleksander traced his tongue across his bottom lip. “As Constance ‘helps’?”

Kirk resisted the impulse to laugh and play it off. It would be a nervous tell and he wasn’t about to give Aleksander the satisfaction. “I was thinking more along the lines of being a friend who helps you let off steam. Physically.” When the chimera’s lips twitched, he quickly added, “I mean like boxing. Or sports. Whatever it is you do to keep in shape.” He motioned vaguely at the other male’s body. “Do you run, or workout or—”

“You couldn’t last with or against me, little human. You’re no use to me in that way.” Aleksander panned down Kirk’s body. “Though you’re fit and…large for your kind.” A crease appeared in his forehead and he resumed staring into his glass.

Fit and large? If you only knew, buddy. 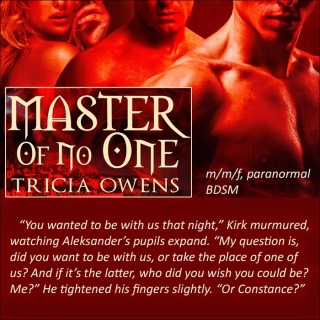 I really enjoyed this novel from the cover to the storyline! It is menage so watch out for the hotness! In a world where the master meets the challenge of his subs this novel will continuously amaze you. This was a first by this author. The plot was a fresh look into the paranormal genre where you are given demon like shapeshifters living among humans who have their own strict rules and regulations! With not subsiding to them can come consequences. Alek is one of these. He is a strong yet flights within his inner self. Constance is one of his subs, she wants nothing more than to serve in every way. But she is stubborn and open minded. Kirk, has an ulterior motive for fulfilling his part. Little do they know that not everything is turning out the way it was meant especially when you have two dominating males in a triad relationship! However, can Constance and Kirk save Alek from hisself before its to late? The author takes you for a whirlwind when these three start to spark up and the tension gets turned up. While at the beginning as the story was building up you got a slow feeling throughout the book it picked up and did not disappoint. I enjoy that the author left no stones unturned with the suspense and as in she brought it out all including the m/m attraction. Overall this a series and author I will follow in the future to see what else she has. 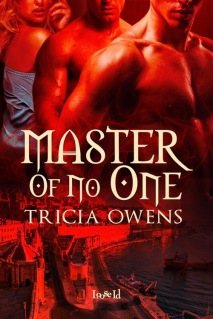 Tricia has been writing m/m fiction since 2002 when she opened her fiction website JuxtaposeFantasy to great success. She later partnered to create Joyboy Island. After a decade of writing for the sites, Tricia decided business demands were distracting her from producing novels, so she closed the sites and now writes at her leisure. An avid traveler, Tricia has visited over 60 countries and tries to include aspects of her global experience in her books.

2 thoughts on “Master of No One by Tricia Owens”