Blair Reynolds was born to rule. Worlds, that is. Destined to reign over an ancient intergalactic race, it may seem her fate is written in the stars. But she’s willing to risk it all for another chance to spend forever with her true love – even if it means traveling through time and space to the other side of the universe.

As far as Ash is concerned, Blair’s happily-ever-after involves him, not the mere mortal with whom she seems so infatuated. She was bequeathed to him by her father, and Ash will go to any lengths to keep Blair and her true love apart.

And Ash isn’t the only one.

Deep in the jungles of Brazil, where tribal drums call to Blair and her true love, other forces carry out dangerous secret plans.

However, Blair has secrets of her own … secrets so lethal she dares not even remember them.

Secrets so painful they could ruin everything.

Because some secrets kill.

I was no longer a bystander to this story. I was the story. Every secret interwoven through the tale I’m about to tell you belongs to me. And the summer I graduated from high school was the summer everything came together in a horrible clash of good versus evil.

Packing up and leaving my small, inconsequential, southeast Texas hometown meant leaving part of myself behind. I said goodbye to the human side of me when we piled into David’s truck and drove away from our home. And I waved farewell to any hope of ever returning as I watched our home slip into the shades of night.

Everything had been turned upside down, and deciding what was good and what was evil was like looking through sunglasses at night. It all washed together in a murky blend of darkness, shadows, and secrets.

My biggest secret of all was one for which I had no answer: which one was I – good or evil? I stuffed that secret deep behind my ribs and swallowed it down.

Some secrets are best kept in the darkness away from prying eyes and those who would seek to face them head-on. Some secrets kill.

She thought she’d grow up to be a large animal veterinarian like her grandfather.  But when she turned seventeen, things began to change … not only to her, but to those around her.  Like a cicada leaving its shell, Blair changes from human to become her self-ordained destiny: the Monarch of an ancient intergalactic race.

Blair’s older telepathic brother who also has a sixth sense of knowing things … some call it ESP.  Andrew is an alien-human hybrid – the byproduct of alien experiments done on his mother and grandmother.  He’s a good guy, but things never seem to go his way.

Love interest and über nerd.  His childhood dream was to become an entomologist one day, because of his love of bugs and insects.  However, those plans never come to fruition.  Like Blair, his fate lies elsewhere.  Joining the Resistance took him far from the plans of his boyhood and into the realization that he was meant for grander things … things beyond the human world.

Charming and sexy, flirtatious Ash will stop at nothing to make Blair his own.  There’s not a human bone in his body, but that won’t stop him from having his share of girls on the side.  They don’t matter, though.  All that matters to him is that he fulfills the promise he’d made to Blair’s father to keep her safe and alive.  She’s the only female the warrior general had resolved to marry, and he doesn’t go back on his promises.  Even though she’d devised a way to separate from him and become an alien-human hybrid, it didn’t matter.  As far as he’s concerned, they will still have Royal Children together and lead their people in a new life on this strange planet.

Handsome and brawny, he was the captain of the high school football team and newlywed husband of Natalie, his high school sweetheart.  David is Andrew’s best friend, and thinks of Blair as his own kid sister.  He’s loyal and true, even though his friend is not quite normal— in human terms, anyway.

She loves her new husband and hopes to raise children with him while teaching kindergarten at the local elementary school.  Natalie was Homecoming Queen and a cheerleader in high school.  Even though Blair wouldn’t have been her first choice of friend in school, she becomes her best friend and fashion stylist.  And that all makes for more sadness considering what happens to her.

A secret member of The Resistance, Mom is a closet badass.  While raising her children, she did her best to provide them with a stable home and a normal mother who baked the best cupcakes this side of the Pecos River.  A young widow, she’d started her own bakery, which secretly funded some of the activities of The Resistance.  Who could blame her?  Hers and her husband’s honeymoon had been ruined when she’d been abducted by aliens.

Everett’s father is a professor of history at a nearby university.  Mom is his love interest, and, like her, he was widowed at a young age and raised his son alone.  Mr. Forster knows all about this alien abduction business, because his wife had also been abducted by aliens the year before Everett was born.

A wise old cowboy and local favorite, Grandpa is known by all the townsfolk for being an outstanding large animal veterinarian.  When his son-in-law and grandson were murdered, he took the place of father figure for his remaining grandchildren.

Orion
They’d once called him The Cicada.  Now, he’s known for whom he really is—one of the alien-hybrid sons of Ash’s fling with a jungle girl who died during their birth.  Along with his brother, he’d been given to his alien mother as a gift in hopes that it would heal a broken union.  Orion would do anything for his adopted mother … no matter the consequence.

Orion’s brother, Nyx is more like Ash.  Though he loves his adopted mother, Nyx favors his father’s affections.  However, to prove his loyalty to his mother … he creates a secret organization meant to keep her safe.  It’s called The Resistance.

Xi
Extremely loyal, he’s the alien body guard of the Queen.  He’s massive, covered in tattoos that note his rank, battles won, and his loyalty to the Royal House.  Xi is the commander of the Royal Guard – an elite group of alien soldiers who serve only their Queen.

One of only two females, she’s second in command in The Royal Guard. She’s a vicious warrior who also wears tattoos of won conquests and loyalty to The Royal House.  Though she’s cunning with her blade and prefers to wear the blood of her vanquished foes as war paint, Max has a soft side.  Orion is her love interest, and she plans to pair with him.

As medic in The Royal Guard, Rake is able to provide a healing touch to those who are wounded, including the Queen.  Rake is one of the only two females in The Royal Guard and stands almost as tall as the men.  Nyx is her love interest.

Make sure that you read this in order because it is a trilogy and you will be confused about what is going on in the story. Even though i didnt read the first two, it has peaked my interest in what has happened to this point. The characters are an amazing triangle that has been well developed.  The author did a great job with giving you enough parts to know what is currently going on. Blair has a choice to make will ahe choose true love or what has been chosen. I would not want to be in her shoes that’s for sure.  Everett and Ash are like day and night where they both want her but for their own reasons. However as she starts to remember,  I felt myself starting to get excited to try and see what she would do and who would be picked. Choices will be made! Lives will come undone! This is a story will keep you entertained for hours. I loved reading something fresh and that is different than my normal reads. I enjoyed tha details that the author gave us as the story unfolds.  This is a story about suspense, adventure, and love! All of the characters are well written and I have to say I loved. The plot was original and as I said before will keep you reading. There is a constant flow! Just this third installment had me falling in love with the story!  I love the gorgeous cover that was choseb for this novel! I definitely recommend this but start at the beginning!

Belle was raised in deep East Texas. She now resides somewhere north of Houston, Texas in a small inconsequential town with the smallest, most inconsequential name. There, in the shady reaches of the pines, elms, and oaks, she daydreams adventures and secrets she weaves throughout her stories. She’s the author of CICADA, FIREFLY, and MONARCH, a Young Adult/New Adult cross-over trilogy with excellent reviews. She studied literature and history at University of Houston where Beowulf, Shakespeare’s works, and the history of the Vikings were her favorite topics. Belle is positive her readers and fans are the best in the universe.

Here’s a link to where proposals to have my books made to movies: CLICK HERE 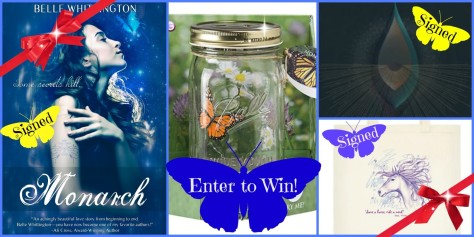 Monarch Jar – Head here to see what they look like

Chocolates from the Chocolate Vault

This tour was organized and hosted by

2 thoughts on “Monarch by Belle Whittington”