Isn’t this a gorgeous cover? 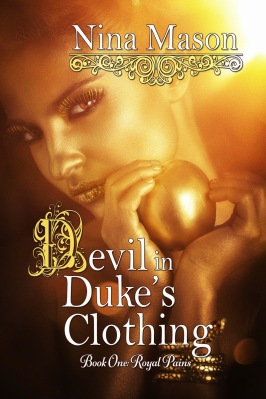 What’s inside is just as wickedly delicious.

Maggie York, a convent-raised foundling, knows the Duke of Dunwoody�s sexual tastes are a shade or two darker than normal, but marries him anyway�partly because she has no other prospects and partly because, try as she might, she can�t seem to exorcize her desire for the dashing ducal devil. Two years ago, she watched him swive and spank her lady’s maid, luring her from the garden of innocence into the orchard of fleshly delights–and she’s been hungry for more ever since.

Robert Armstrong, the duke, is a Roman Catholic whose extreme devotions as a child warped his desires as a man. He�s also a slave to the times in which he lives–and to his king. Everything he is, everything he holds dear, depends on staying in Charles II�s good graces. Unfortunately, Maggie isn’t the bride the king selected for him. Now, to make amends, the duke must choose between the lesser of two evils: whore his wife or be reduced to a penniless commoner.

Whose interests will Robert choose to serve, his own, the king�s, or the woman he loves?

Here’s an excerpt from the Prologue:

Maggie York had not set out to be a spy.

She�d only come into the housekeeper�s closet to look for a bootlace. It had finally stopped raining and she was eager to escape the musty, smoke-choked prison the castle had become over the past se�nnight. Sick to death of books and needlework, she yearned to be out of doors picking flowers or stalking rabbits, but could do neither of those things until she�d replaced the broken lace on her boots.

Now, she was where she should not be and someone was coming. Two someones, actually. If they caught her here, she�d be punished the way she�d been several years past when she�d broken the vase belonging to the duke�s mother. The old duke, the young duke�s late father, had tanned her hide so severely she hadn�t been able to sit down for a full week without wincing.

Fear pumped through Maggie�s veins as the larksome duet drew nearer. The lady was her absent abigail. The gentleman�s laughter  she could not place. The duchy employed several male servants�footmen, a valet, a coachman, a gardener, and a handful of strapping young grooms–but the baritone tenor was unlike any of theirs. Neither was it the laugh of the duke�s younger brother, who�d been blessed with a cheerful disposition. The sounds of Hugh�s gaiety echoed so often through the castle�s corridors, she would have known it anywhere.

There was, however, one gentleman residing at Balloch who�d never laughed within range of her hearing. Once or twice, he�d deigned to grace her with a smile�and, Lord bless her�what a thing of beauty �twas to behold. Like the sun breaking through the clouds on a gloomy day. The merest glimpse made her bones feel like they were made from tallow. What a pity he was so seldom cheerful.

The laughter grew still louder. As the door opened wider, panic erupted in Maggie�s chest. She could not let them find her snooping like a common thief. Pulse racing, she closed the French doors betwixt closet and room as swiftly and quietly as circumstances permitted.

As luck would have it, the door�s linen curtains were arranged in such a way as to allow her to see into the room without being observed. The man came in first.

Her breath caught when she saw �twas none other than the duke himself�in naught but his kilt and shirtsleeves!

Why were they both half undressed? What could they be about?

Maggie bit her lip as she watched in breathless silence.

After locking the door, the duke dropped the key into his sporran and led Mistress Honeywell to a long sofa facing the closet. Maggie�s heart leapt into her throat. She drew back and held her breath. If he saw her, she was doomed.

The maid sat quietly whilst he filled the antimonial cup with Mrs. McQueen�s medicinal whisky. Was the duke ill perchance?

His grace returned to the sofa and handed Mistress Honeywell the whisky. Was it the maid who�d taken ill? If so, why apply to the duke for physick? Maggie could not reason it out.

He stood over the maid as she drank the whisky. Since his back was to the closet, Maggie could not see what passed between them. After a spell, Mistress Honeywell rose and they turned to face one another, providing a perfect view of their full-length profiles.

Maggie expected them to embrace, but they did not.

Instead, Mistress Honeywell set about unlacing her bodice whilst he watched with rapt interest.

The maid wore no stays, but clearly had no need of their support. Her paps, though large, stood as proud and sure as a pair of cockerels.

When Mistress Honeywell was down to her shift, the duke stepped forward, untied the neckline drawstring, and reached inside with both hands.

Maggie swallowed a gasp when he seized both the maid�s breasts and proceeded to knead them like dough. Mistress Honeywell, astonishingly enough, offered no reproach. She only tipped back her head, parted her lips, and emitted a breathy sigh.

How could she abide, let alone enjoy, such exploitation? If a man ever treated Maggie thusly, she�d slap him so hard he�d see stars for a week!

The duke swept the shift off the maid�s shoulders. The thin garment slipped down her body to her ankles. To Maggie�s astonishment, Mistress Honeywell appeared to be unashamed–either by her nudity or his grace�s covetous stares.

By the light of Our Lady�s brow! Such impiety was not to be borne. How could they be so wicked? As Roman Catholics, both had to know what they were doing was sinful.

Here’s a wee bit about the author:

Nina Mason is a hopeful romantic with strong affinities for history, mythology, and the metaphysical. She strives to write the same kind of books she loves to read: those that entertain, edify, educate, and enlighten.

When not writing, she works as a communications consultant, doll maker, and home-stager. Born and raised in Orange County, California, Ms. Mason currently lives with her husband, teenage daughter, two rescue cats, and a Westie named Robert just north of Atlanta, Georgia.

Here are the author’s stalker links: