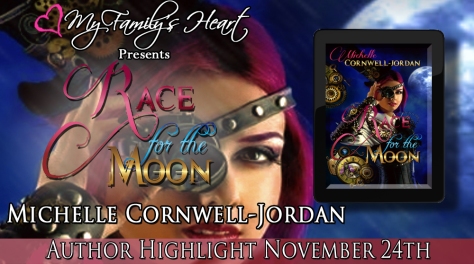 TITLE  Race For The Moon

When Ten year old Ivee falls asleep one night, she awakens to a strange new world; one without Adults. She and those like her left behind discovers that anyone twenty-one years old or older had vanished, including her parents. Along with the disappearances of loved ones; every modern convenienceelectricity, computers, phoneshad been taken away as well.So Ivee discovers herself in a strange new world and with the realization that she is responsible not only for her survival, but that of her sister Celia.

Seven years later, Seventeen-year-old Ivee is happy with her life; feeling safe behind the gates of the Northlander’s camp in the Northern Division of Athol. Things were good until her sister gets kidnapped by another factionthe Downenders. Ivee receives a map and a message; she has a week, which is the next full moon, to make her way to the southern end of the city, to save her sister. As she sets out on her journey; Ivee discovers how different everything has truly become outside the gates of her home. She witnessesPhantom Airships, Manbots and Ghostly Wolvesas just a few of the surprise encounters during her quest. She is not alone; one of her campmates joins her mission, and she also meets a handsome and mysterious boy, called the Savior. He teams up for their journey, only saying he has unfinished business with the Downies.

Many truths arise during the adventure, the biggest truth Ivee discovers is that she will do whatever it takes to persevere, against the terrors of the dark new land.

She is also the producer of the online radio segment IndieReview Behind The Scenes, where she and her co-host Jamie B

Michelle has been married for 19 years and has a 16 year old daughter. A book lover, her favorite genre has always been paranormal adventures.

Another love is writing. Michelle has been writing about as long as she has been a bibliophile! Losing herself in a fantasy world that she is creating on paper is how she loves spending her spare time.

Race For The Moon Prize Packet

– 1 Signed Copy of Race For The Moon