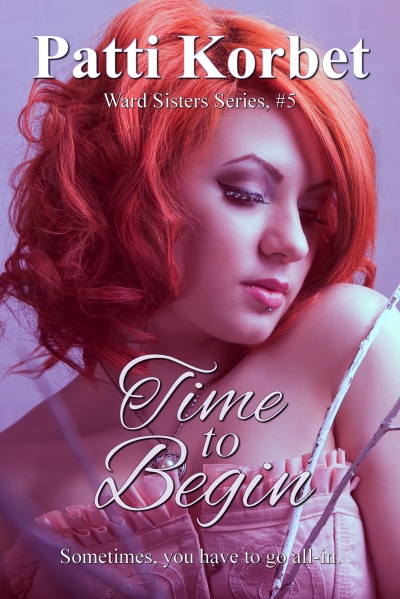 She’d been dealt too many blows to count. He’d always lived life on easy street. Are they Yin and Yang or a mistake of epic proportions?

Makeup artist Reggie Reynolds has endured a life as colorful as her ever-changing hair. After a painful childhood and a tragic adolescence, by sheer force of will, she found success  first in Hollywood, then on Broadway. Returning to her hometown offers a chance to help her aging grandfather and realize her dreams, not to mention soothe a broken heart. But even her storied past won’t prepare Reggie for what happens in her next chapter.

When reporter Eddie Besson meets Reggie on a flight to New York City, he thinks he’s at an all-time high-point in his cushy, perpetual-youth life. Twenty-four hours with Reggie changes Eddie’s perspective. Despite the fact she doesn’t want anything to do with him when he leaves, Eddie can’t stop thinking about the girl from New York City long after he’s gone from the Big Apple.

As Eddie’s perfectly-orchestrated life falls apart, he has some tough decisions to make, with only one thing certain: there will be consequences to pay for his lackadaisical approach to adulthood. Reggie’s own soul-searching reveals some painful truths, including guilt about passing judgment on the guy from Maine. When she runs into Eddie again  this time on his home turf  sparks fly and decisions must be made, choices that aren’t universally well-received. Will this unlikely pair go all-in, find a way to balance the scales and live life on their own terms? Or will tragedy tear them apart for good? 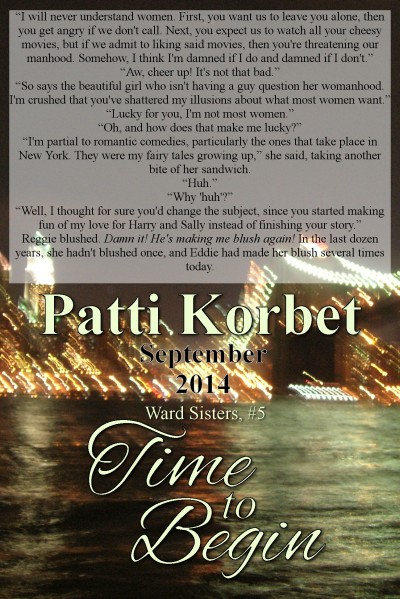 The girl with the pink and black striped hair kept looking at him. Eddie thought he was just being paranoid at first, but she was definitely staring. He didn’t think he could possibly know her  after all, she looked like part of a Punk crowd, and despite his appreciation for the genre, that was definitely not his speed of social group. Maybe they’d had classes together in college. She might be around his age. But though he felt like he knew her somehow, he didn’t recognize her.

Pink Hair didn’t make any effort to engage him. Nonetheless, there she was, staring again. This time, though, her eyes watered and she looked like she struggled to keep the tears away. Maybe she wasn’t staring at him so much as through him. He should probably ignore her. But then her eyes drifted shut and a tear escaped, running down a surprisingly angelic face.

Shit, he thought. Don’t do it, Besson. Just stay where you are.

He got up and moved to sit next to her. When he put his hand over hers, she jumped a little and looked at him, confused.

Um, not really. But it’s nothing. Don’t worry about it.

If it was nothing, then you wouldn’t be crying. Want to talk about it? Jesus, what was it with him and providing an ear these days? First Kay and her marital troubles, now a stranger? Who next? Maybe she’d say no. Hopefully.

Oh, good. That’s a relief, he thought. Eddie’s hand was still covering hers and she looked down at it. Since she didn’t pull her hand away, Eddie left his there. Maybe it comforted her. Maybe it would be enough and she wouldn’t use him as a sounding board. She sniffed and when she looked up she smiled at him.

Eddie. You headed to New York?

He nodded. I’ve got a meeting.

Oh? You in finance or something?

Eddie laughed. Hardly. No. Reporter. I work at a small-town newspaper up north. My boss is sending me to meet with a potential new buyer for the paper.

She’d bristled a little at the word ‘reporter’, but relaxed again when he said he worked at a small-town paper. Huh.

Because you run things?

Nah. They want to meet with all the editors and I was away when they came last month. I guess it’s nearly a done deal and they want to figure out where we all fit in their organization.

Oh. How long are you in the city?

A day. Fly down today, fly back tomorrow. What about you? Why are you headed to NYC?

I live there. Well, in Brooklyn, anyway. I work in the city.

What do you do? If you don’t mind my asking. Sorry. Reporter’s instinct to ask questions.

Oh yeah? Where do you work? In the movies?

I did. For a long time I worked in L.A. on movie and TV sets. I’ve been on a Broadway play for the past seven months. We were supposed to be done after six weeks. Then it stretched to six months. We’re regrouping right now, but we’re back to work tomorrow. They’re talking about a long-term run.

It’s basically my dream job. I always wanted to work on Broadway, but it’s hard to get into the business there. Much easier in Hollywood, where there are a million different productions. Eventually, if you meet the right people, you’re set. I got lucky and hooked up with a stylist when he was just getting started. That led to where I am now.

Eddie smiled. Seems like you made some smart moves.

I did. Now I get to work in my hometown and be near my family.

Eddie laughed. Me too. But somehow, I don’t think my hometown quite compares with yours.

No? Population isn’t in the millions? No loud noises, smelly exhaust or ridiculous traffic?

No all-night takeout, no clubs with up-and-coming music. No way to escape your family, even when they’re driving you nuts. I love everything about New York.

Me, too, Reggie said. Those are just people’s usual complaints. But everything you said, that’s the reasons why I love living there. Plays, music, art, culture, food, history. It’s all there.

I guess it’s time to board. Where are you sitting? Eddie asked.

No way. I’m in 14A. Looks like we’re sitting together.

Reggie smiled. Good. I was going to have to ask your seatmate if I could switch. Now I don’t have to do that.

Wake Me Up  Avicii

Who Says  Selena Gomez and The Scene

Thank You  The Shapes

Escape From New York  The Shapes

Claim Your Prize  The Shapes

How Does It Feel  The Waking Hours

All On Me  The Shys

Turn Me On  Bromheads Jacket

I Couldn’t Imagine  Julie the Band

Take My Picture  Best Not Broken

The Mess I Made  Parachute

Hanging By A Moment  Lifehouse

Baby, I Love You  Ramones

I Wanna Be Your Boyfriend  Ramones

Eddie Besson is that guy, the one who still acts like he’s in college, despite entry into his 30’s. As the sports editor for his small, hometown newspaper, he lives above his parents’ garage, spends his free time hanging out at the one bar in town and strings along his high school girlfriend. The kicker is that he doesn’t really think there is anything wrong with his life. Until he meets Reggie Reynolds, and suddenly, his world seems pathetic and wasteful.

Broadway and Hollywood makeup artist Reggie Reynolds fought hard for the life she has now. Abandoned by her parents, she clung to her beloved grandparents as long as she could. But her grandmother was taken by illness, and now her grandfather is succumbing to age. She has never been lucky in love and is sure she is doomed for a life without it. Then she meets Eddie Besson and the world gets a little brighter, even if just for a moment.

For a majority of her life, two things have been true about Patti Korbet: she loves to read and she has a very active imagination. You can often find her with a book or her Kindle in hand. And in the last few years, she’s frequently been typing away at her little netbook, turning the myriad thoughts that run through her head into story ideas.

Her career path to author has had many twists and turns, but Patti has been making up stories in her mind for as long as she can remember. Just as her son turned 9 months old, she made serious work of molding those stories into works of fiction. She put her nose to the grindstone in the fall of 2012 and hasn’t looked back since.

When not reading or writing, Patti pretends to be a gardener, loves to dance, watches a variety of shows with compelling characters and most importantly, takes care of her family of four. She hopes one day to convince her husband that fiction writing is a worthy pursuit. In the meantime, she’s proud to see the seeds of imaginative storytellers and prolific readers in her daughter and son.