Whatcha Gonna Do With A Cowboy 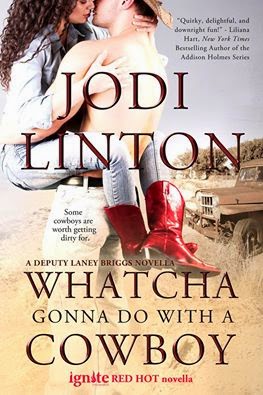 On Wednesday, August 20th from 8:00pm – 11:00pm EST I am hosting a Facebook Party to help celebrate the release of Whatcha Gonna Do With A Cowboy. There will be special guests, lots of fun & prizes, and tons of cowboys!

Some cowboys are worth getting dirty for.

In her latest adventure, sassy Deputy Laney Briggs discovers the local high school football coach passed out under the stadium bleachers wearing nothing but a smile…and his wife’s lingerie.

Things really start to get wild when she runs into the smoking hot Federal Marshal, Colt Larsen, snooping around the Granger’s house. Quicker than a cold snap comes and goes in Texas, Laney finds herself up to her eyeballs in a case involving a ruthless motorcycle gang, a Mexican drug cartel, a kidnapping, and a shoot-out to rival the O.K. Corral.

In over their heads, Laney calls in the big guns—her very own Texas Ranger, Gunner Wilson, who’s ready to fulfill every last one of her desires. But as things heat up between them, the stakes get higher than ever, and Gunner’s help may not be enough for Laney to get out alive…

I plopped into my chair, tossed my hat on top of the desk, then did the same with my legs. Leaning back, I shifted my weight to get comfortable and opened my mouth  to begin telling him everything that had gone down since we’d parted ways at the stadium. “The gentleman I was speaking with is—”

“What the pretty lady was about to say,” a voice said, cutting me off in mid-sentence, “was that I’m the federal marshal she met at the Grangers’ place.”

I peeked past Elroy and wanted to die on the spot.

There, hunkered down in the back corner of the station, a hip resting against the wall, and a muscular arm tossed over the Igloo water cooler, was Colt Larsen. “How the hell…?”

He moved away from the wall and stood in the middle of the room, straight and tall. “More precisely, I’m Federal Marshal Colt Larsen from Tarpon Pass.” The smug asshole extended his hand toward Elroy.

“Tarpon Pass,” Elroy said, shaking his hand. “Now where might that be?”

“It’s down on the coast. Not too far south of Rockport,” Colt answered.

“It’s a nice town,” Colt replied, then fixing his eyes on me, he added, “We’d love to have you come out and visit. We welcome folks of all kinds in our town.”

Elroy wiped his mouth. “My, my, a federal marshal.” He shot a look my way. “I bet Gunner’s going to lose it when he finds out you’ve tagged yourself another cowboy.”

Colt let out a short cough. “Do you mean Gunner Wilson?”

“Yeah. Who else would I be talking about?”

I shrugged. “And your point is?”

“It just all makes perfect sense why you shot at me tonight, that’s all.” He smiled some more, crossing by the desk and making a turn down the corridor leading to the single jail cell.

I got up and stalked after him. “Colt Larsen,” I shouted at his distancing back, “I’m warning you. If you take another step, I’ll…”

He spun around. “You’ll what? Shoot me?”

“Maybe.” I fisted my hands at my side. “Are you always a pain in the ass?”

He pulled off his hat and scratched his head. “Yes, ma’am. Well, that’s what my ex-wife used to always tell me.”

That silenced me for a minute. Before I could cough up a reply, Colt took it upon himself to help me out.

“I can’t believe it. The infamous Laney Briggs is speechless,” he taunted, winking. “Is it that you don’t see me as the marrying type?”

I narrowed my eyes and called, “Elroy, get the keys to the cell. We’re about to have ourselves a little chat with Mr. Granger.”

Jodi Linton lives and works in Texas, with her husband and two kids. She can be found cozied up to the computer escaping into a quirky world of tall tales, sexy, tight jean wearing cowboys, and a protagonist with a sharp-tongue quick enough to hang any man out to dry.  She is currently at work on her next Deputy Laney Briggs book.

Have you met Laney Briggs and want to help promote and support the Deputy Laney Briggs novels and all things Jodi Linton? I am always looking for active members to join my Facebook Street Team, the Pink Pistol Readers. If you are interested, click here to request to join the group!

Jodi is also offering a giveaway for anyone who leaves a review for
Whatcha Gonna Do With A Cowboy!
a Rafflecopter giveaway

Dom Wars The Final Round by Lucian Bane & Aden Lowe

*RECOMMENDED FOR AGES EIGHTEEN AND UP DUE TO EXPLICIT SEXUAL SITUATIONS, AND STRONG LANGUAGE When Gladiator Inc, an adult toy company expands their market to familiarize the ‘vanilla’ world with the elements of BDSM, the result is a pay-per-view reality show with video feeds streamed live to subscribers. The show, Dom Wars, is a competition to determine the Top Dom that will become the spokesperson for the company. The contestants all wear cameras to film every moment and angle of the competition, while they complete various challenges to determine who has ultimately Dominated various elements of themselves. The hero and heroine of the series, Lucian Bane and Tara Reese, have barely made it into the Sixth and Final Round of Dom Wars. This week-long Survival Round will determine the Top Dom, once and for all. The contestants are taken to an uninhabited island, where they will have to cross formidable jungle terrain. First Dom to reach the boat anchored on the other side of the island wins the million dollars and the title. Seems simple. Except Lucian’s old adversary, the Sadist Jase Duff from Round One, has been tasked with making sure none of the five teams make it to the boat. If he is successful, he wins the prize, only it’s not money that Jase Duff cares about, its revenge on Lucian and Tara. And his sadistic need to inflict pain makes it game on.

*Warning, this trailer contains strobe light effects. Please do not view if you are sensitive to these lighting effects.

My name is Lucian Bane, and I’m an Ineffable Dom. That just means, do yourself a favor and please don’t try to fit me into categories. Complicated Dom, Intricate Dom, or Confounding Dom work too. I don’t want a woman I can break, or overpower, or exercise my dominance over. I want a woman I can come undone with. I want a woman I can lose myself in. I think there are many men like myself, and I hope my writing will be a map for them. (And women, to let them know Doms like this exist.) I want to challenge men to go for the complete power exchange with a woman, but don’t be a coward and not give the same that they demand or expect. Consider that when you give one hundred percent of yourself to a person, there is no more of you to give away. You now belong to them the way they belong to you. Inner Doms need a master to train them. I once bowed to my Dom’s reckless and tireless desires, but when I gained control, he bowed to my will. The transformation made me into what I am today. What many would call an Ineffable Dom. But its equal term in the Vanilla world, in my opinion, is a real man.

Find us on Social Media

It’s A Brand New Cover For:

Tristram Tremaine has never fit in with his large and boisterous family. They believe they carry a magic gene that comes alive only when they fall in love with another who carries that gene. After disappointing his parents one too many times, Tris, the bad-boy brother, hits the road on his cycle, drifting away from his destiny.

That is, until he meets Maggie O’Brian, a spit-fire rodeo rider with a strange ability to calm wild horses. Maggie lives on the road too, avoiding relationships. Her mother left her, the boy she loved left her, even her dog left her. The last thing she wants in a man is a tomcat with “love ‘em and leave ‘em” written all over him.

But the connection between Tris and Maggie is instantaneous. After a mysterious accident nearly kills Tris, he and Maggie must learn to believe in their destiny and each other to stay one step ahead of those who will do anything to prevent them from claiming it. 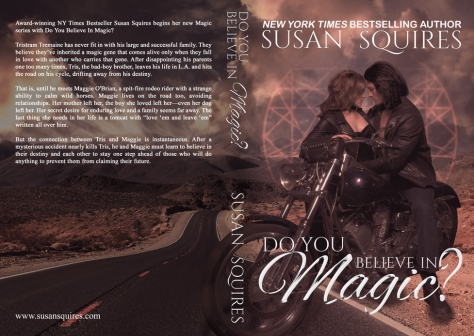 Susan Squires grew up among the giant redwoods of California. She thought she was being practical by changing her major in college from theater to English literature. Immersed in a PhD. Program, she slowly realized that none of her graduating friends had work. So she dropped out after receiving a Master’s degree to take a paying job in the business world.

As an executive in a Fortune 500 company, she returned to her love of writing while continuing to hold her day-job, much to the amusement of her fellow executives. Her novel Danegeld, had already been purchased by Dorchester by the time she accepted a Golden Heart for Best Unpublished Paranormal Manuscript from Romance Writers of America. It was the first of an eclectic group of historical and contemporary paranormal stories known for their intensity. Body Electric was named by Publishers Weekly one of the ten most influential paperbacks of 2002, for blending romance and science-fiction. Book List compared No More Lies to the works of Robin Cook and Michael Crichton, but it was also a Rita finalist for Best Published Paranormal Romance by Romance Writers of America.

Susan’s Companion Series for St. Martin’s Press, continued to garner attention with admiring reviews and several visits to the New York Times Bestseller List. Publishers Weekly named One with the Shadows a Best Book of the Year, and several of the series received starred reviews. Her books have won the many regional contests for published works of paranormal romantic fiction.

Susan no longer has to use tales of romance and adventure to escape budgets and projects. She finally left her day job, and researches and writes her books at the beach in Southern California, supported by three Belgian Sheepdogs and a wonderful husband named Harry who writes occult mysteries as H.R. Knight.

A Billionaires and Bikers Novella

Four years ago, Bee Carter left her tiny hometown, escaping her tormenters. She concealed her tarnished reputation under a good girl persona, hiding her history from Nicolas, her strong and silent billionaire, Hawke, her tattooed bad boy biker, and Cyndi, her man crazy best friend.

Today, she’s returning home… and she’s not alone. Some of her deepest darkest secrets will be revealed. Trust will be tested. Clothing and inhibitions will be discarded. Bee and her hometown will never be the same.

When her past and her present collides, will any of Bee’s relationships survive?

Cynthia Sax lives in a world filled with magic and romance. Although her heroes may not always say, “I love you”, they will do anything for the women they adore. They live passionately. They play hard. They love the same women forever.

Cynthia has loved the same wonderful man forever. Her supportive hubby offers himself up to the joys and pains of research, while they travel the world together, meeting fascinating people and finding inspiration in exotic places such as Istanbul, Bali, and Chicago.  Please visit her on the web at http://www.CynthiaSax.com