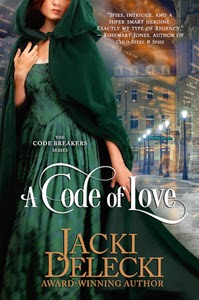 A Code of Love (Book 1 of the Code Breakers Series)

In his new, undisclosed position as Director of English Intelligence, Cord faces more peril keeping the brilliant, Harcourt family of code breakers safe than he did as undercover spy in Napoleonic France.

Cord’s passionate attraction for the indomitable Henrietta hasn’t diminished in his four years abroad, but neither has Henrietta’s memory of his libertine past.

In pursuit of the missing brother, Henrietta and Cord become entangled in a web of international intrigue, danger, and white hot passion.

Add it to GOODREADS

“They call themselves gentleman, pshaw.” Henrietta plunked her boot into a muddy hole on the sidewalk outside the Abchurch secret offices. Cold water seeped through to her toes. “Arrogant, self-righteous….” The unpleasant feel of wet stockings only served to fuel her anger at the clerk and all the men in the Abchurch office, the bastion of male superiority.

Her body shook from the insult and her soaked clothes. The clerk, who had refused her admittance to speak with Sir Ramston, had implied she was a spinster worried for naught about her brother. She bowed her head into the driving rain, glaring down at her sodden black boots. Her dark mood festered like the foul weather plaguing London this last week of April.

The impact was sudden. She stumbled backward, her arms swung in an outward arc. The slippery mud grabbed at her boots.

The man thrust his hands in the mud beside her shoulders trying to stop the impact of his large body driving her further down on the wet ground.

The shock of the fall left her immobile and speechless. She was flat on her back in the middle of a main London throughway with Lord Rathbourne’s hard body pressing against her. The huge man loomed over her, grinning with all the nerve of a blatant libertine. Looking up into his chiseled face, she noticed the small laugh lines surrounding his bright eyes that seemed to be laughing back at her.

This story takes place in one of my favorite times when they had spies and they had different status (dukes, lords, ladies etc) in London. I was intrigued with the cover and the blurb because you could tell it had some mystery along with some romances, and the author did not fail in this category. The romance time was done with taste and well followed with what they would have done in the historical London time. The main heroine Lady Henrietta has always been the perfect lady, followed what she was told (of course she does have a mind of her own but so her family secret doesn’t come out she has to hold on to it at times) But when it comes to Lord Rathbourne, all odds are out the window because she can’t seem to control herself. Lord Rathbourne is infatuated with her and just wants to court her but she will have none of it. The author did an amazing job by creating two very different characters that are forever clashing but will keep you entertained throughout the book. However, when a villain is made present these two must find a common ground. Question is can they or will their differences continue to cause issues for everything? Will the Lord be able to prove to his Lady that he has indeed changed? The plot line kept me entertained especially as you get deeper into the story.  I have to say I truly enjoyed the story that the author enjoyed and hope to see more in the future.

Descended from a long line of storytellers, Jacki spins adventures filled with mystery, healing and romance.

Jacki’s love affair with the arts began at a young age and inspired her to train as a jazz singer and dancer. She has performed many acting roles with the Seattle Opera Company and the Pacific Northwest Ballet.

Her travels to London and Paris ignited a deep-seated passion to write A Code of Love, a romantic mystery set in the Regency era. Jacki is certain she spent at least one lifetime dancing in the Moulin Rouge.

Although writing now fills most of her days, she continues to volunteer with Seattle’s Ballet and Opera companies, as well as leading children’s tours of Pike Street Market. Her volunteer work with Seattle’s homeless shelters influenced one of her main characters in An Inner Fire.

Jacki’s two Golden Labs, Gus and Talley, are her constant companions. Their years of devotion and intuition inspired her to write both dogs as heroes in A Code of Love. A geek at heart, Jacki loves superhero movies—a hero’s battle against insurmountable odds. Fortunately, her heroines don’t have to wear a unitard to fight injustice and battle for the underdog. Jacki’s extraordinary heroines love and heal.