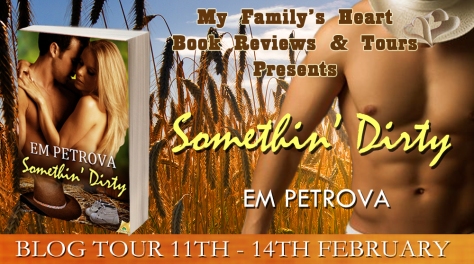 She’s headed for the big time…unless her heart gets stopped at the pass.

Forty-two-year-old single father Griffin Turner couldn’t have made it through colic and calving season without his mother’s babysitting services. But just when he thinks he’s got the hardest part of the infant learning curve licked, he gets devastating news. Mom is sick. And Griffin is forced to hire a nanny.

With nothing but twenty dollars in her pocket and her voice, Nola Brady wants to leave small-town Wyoming to pursue her dreams in Nashville. She answers Griffin’s ad to keep body and soul together until her big chance arrives. Love isn’t even on her radar…until she unexpectedly falls for the rough-and-playful cowboy.

Between the sheets, they’re poetry. Outside the bedroom, he inspires her to be more woman than she ever dreamed possible, which scares her enough to put on the brakes…and hit the road.

But if she thought he’d just let her leave quietly, she was wrong. Because hell hath no fury like a cowboy in love…especially one with a baby on his hip. And a ring with her name on it.

Warning: This cowboy daddy is determined to make a May/September romance work—even if he has to lay down his palm or his mouth on a round ass cheek to do it.

What the hell was he thinking? Nola was twenty-five if she was a day. Was her brain even fully formed?

But oh Christ, the sight of her stomping her curvy legs to the beat as she ripped through the notes of that song made him harden painfully. When she flashed him a grin, he focused on her luscious pout and his cock swelled another inch. How, he wasn’t sure.

The first two songs she’d sung had blown him away. Reedy’s superstar was an understatement. The girl could sing. What was she even doing in small-town Wyoming?

She strutted across the stage on those little red cowgirl boots, the frayed hem of her mini-skirt riding high on her thighs.

He had to get out of here before he lost control. He’d sworn off younger women. Nola was probably a student just like Miranda.

He stared at the dark strawberry blonde waves spilling over her shoulders and reaching for her cleavage, and he knew he was in serious lust. Lust equaled trouble. What could he do anyway? Take her home and halfway through hammer-f**king her over the edge of the bed, Lyric wakes up and screams for a bottle?

He scuffed a hand over his features, trying to wipe away the pounding need that must be evident in his expression. For an hour, he’d shirked his duties as designated driver, allowing others to shuttle people home so he could remain with Nola.

Nola. Her name tasted old-fashioned and brand-new at once on his tongue. A pretty little thing with tanned legs and a killer voice. What she was doing in Reedy, wasting those talents was beyond him. But he wasn’t ready to see her go yet, if that was her plan.

She threw her head back and held a long, throaty note that raised the hair all over his body.

Applause erupted, and he stuck two fingers in his mouth and gave a shrill whistle. When she scanned the crowd and sought him, his balls clenched up tight. That look held more promise than a man of his age and carrying his amount of baggage deserved.

Still, could he pass it up if she offered?

She jumped off the stage for the third time that night, and someone handed her a shot glass brimming full. Some of the amber liquid sloshed down her fingers, and all he could think of was guiding those digits to his mouth and sucking them clean.

Holding his gaze, Nola knocked back the whiskey.

He stepped forward and removed the glass from her hand. Setting it on the edge of the stage, he caught her fingers. She inched close, invading his senses with lush curves and the ripe scent of vanilla and arousal.

Perspiration dotted her throat, and he licked his lips, hungry for a taste.

“You’ve had too much to drink. I’m taking you home.”

“I was hopin’ you’d say that.” She waved at the redhead who had to be her sister, then pointed at him.

Griffin shot the sister his best nice-guy smile. No, I’m not a rapist or murderer. I’ll see your sister home safe. I just might steal a kiss or more if she’ll allow.

Heart wild in his chest, he wrapped an arm around Nola’s waist and guided her out of The Hellion. The brisk night air cut through the heat of his need, and he gulped the coldness into his lungs.

Maybe he shouldn’t try anything, just take her home and be honorable.

“My truck’s over here.” He waved at a well-used truck splattered with mud from the back tires and wished like hell he had something fancy for her.

She walked at his side, as steady as if she hadn’t drunk three beers and a whiskey throughout the night. For a little gal like her, that was a lot of alcohol, even spread out over a few hours. She could still sing like crazy even with alcohol in her veins.

By the time he guided her into the truck, he’d made up his mind that he wasn’t even going to try to kiss her. But when he got in and she scooted all the way over in her seat, leaning over the console, and threaded a hand into the hair at his nape, all self-control went up in a puff of smoldering hope.

“Where does a guy like you come from? I’ve never seen you in Reedy before.”

“I’ve lived here all my life.” His lips were inches from hers, and her breath washed over him. He studied her hooded eyes and the tips of her lashes, dark with mascara. Stripped of makeup, her lashes would be red-gold.

And the hair between her legs too.

“Hell,” he groaned and dropped his mouth to hers.

The first taste punched him in the gut. He snapped his arms around her, hauling her over the console and onto his lap. She clung to him, soft and willing female, her silky thighs draped over his.

He sealed her mouth under his for several seconds then could stand no more. He probed the seam of her lips with his tongue.

She opened to him at once. Her quiet mewl transformed into his croak of need. He trapped her face in his hands and angled her head to sink his tongue deeper into the sweet recesses of her mouth.

Pleasure-pain built in his groin, his erection throbbing against her maddening heat.

He bent her back over his arm until she was pinned to the driver’s door, sucking her tongue, nibbling her plump lips.

She wiggled and tugged on his hair, drawing him closer. Her breasts conformed to his chest as if she’d been made for him.

He tore away. Gasping, he stared down at her. She squirmed like a kitten under the gaze of a hawk.

She twisted a hank of his hair. “I wanted you to.”

This book had me immediately hooked from the cover design to the story line of the book. It is one of those that once you start you feel like your emotions are brought into the book and don’t want to put it down for anything, at least that’s what I felt like.

Griffin has always lived his life as a rancher and thought he found love at a late age with a younger women but when she ends up pregnant and decides its not what she wants then tries to perform an adoption without him, he goes alpha male and becomes #1 daddy to this little princess. He soon begins to realizes life has different plans for him.

Nola has exceptional talent and knows what she has always wanted. Or does she? However, when she finds a job helping a single dad with a gorgeous little girl her heart starts to be questioned. How will she achieve two different goals and bring them into one?

And with this being the first one I have read by this author I will definitely have to go see what else she has for me because by this book I can tell she entraps her readers. And anything that gets my attention at the beginning and keeps it until the end of story deserves a 5 star. The pace and the way it was written flowed perfectly, including the way she introduced the characters. My main thing when reading is being able to connect with the characters and will have to say that I loved the characters in this one. Throughout the whole book the author brought real feelings and also life like problems into this book but kept it still as a great read. I would without a doubt recommend this book to others

One thought on “Blog Tour & Giveaway~ Something Dirty by Em Petrova”