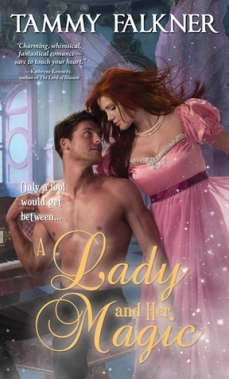 Rules Are Made to be Disobeyed…

Sophia Thorne is new to the Regency’s glittering high society, which resembles her magical homeland only insofar as both places are filled with ridiculous rules. Which means no matter where she goes, she’s bound for trouble…

And Scandals Are Meant to be Shocking…

The Duke of Robinsworth has flaunted and shocked society for years. In a moment of fateful mischief, Robinsworth encounters the enchanting and distinctly scandalous Sophia. Between her streak of magical mischief and his penchant for scandal, they’re about to take rule-breaking to a whole new level..

An enchanting read filled with magic, love, humor, and the land of the Fae. Tammy Falkner has created a beautiful world. I loved everything about this series. I got so wrapped up in it. I read it over the weekend and just couldn’t put it down. I laughed so hard at one point my husband looked at me like I was crazy! I loved all the characters. The chemistry and banter between Sophia and Ashley was HOT! Very well written.
The world of the Fae has a several rules. One of them being Do NOT Fall in love with a human.
Sophia Thorne is a fairy on a mission trying desperately not to lose her wings and Ashley(The Duke of Robinsworth) daughter is her chance at redemption. As she tries to unravel the mysteries surrounding them she finds herself drawn to the dangerous duke. She tries to stay focused on her reason for being there but how can she when the handsome duke is seducing her. Then her world is turned upside down when she discovers some things from her past. All she has ever known is about to change.
Ashley has hidden from society for years but when he meets Sophia she makes him want different things. She is changing not only him but his unruly daughter. How can he keep her with him when she holds her own secrets and is determined to run from him.
The Duke will not let his stubborn fairy get away.

Don’t miss out on this series it was amazing! 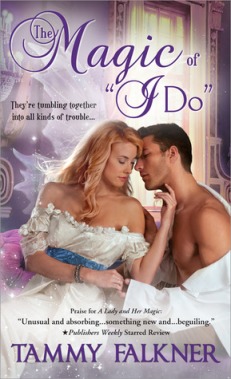 With the temporary prohibition on magic on the land of the Fae, Claire Thorne might as well go back to the Regency world. The haut ton has just as many annoying rules as her world, but at least they have parties and dances. Plus, the roguish Lord Phineas “Finn” Trimble is there…

When the feisty faerie tumbles into his room through a magical portal, Finn can’t believe how completely unpredictable she is. Even before the two stumble into a dangerous intrigue that threatens both their worlds, Finn discovers that his hitherto carefree life is about to go up in smoke…

I do believe this was my favorite book in the series! I loved the passion,chemistry,mystery and pure hotness of the book and I laughed my butt off!
Claire is basically kidnapped by Lord Phineas (Finn) while his brother sorts out his love life to her sister in the land of the Fae.  Finn is a ladies man until he meets the one fairy that he can’t keep his hands off of.They share one magical night and she disappears, leaving Finn heart broke. Until months later she falls into his room through a magical portal. Now that she is back he will not let her go again.
Claire and Finn head butt at every turn and she gives him a run for his money! She also has a secret that will change everything between them. Together they stumble into a dangerous intrigue with an old family enemy that may end up costing their lives and new-found love.
This was one of those stories that stayed with me and I still find myself thinking about!

Love triumphs over all differences…even those of wings and magic

Marcus Thorne was groomed to be one of the Trusted Few in the land of the fae, but now he must step into his father’s title in the British ton. Cecelia Hewitt, a half fae/half human, has always lived in the human world and is not accustomed to wings and magic. Completely unprepared for their new positions, Marcus and Cecelia strike up a partnership to teach each other about their respective worlds. In the process, they discover they have more in common than they ever expected-including a burning mutual attraction.

Another great one!  It will keep you laughing, smiling and blushing. Such a sweet love story! There hasn’t been a book written by Tammy Falkner I haven’t loved! She sure knows how to write a fantastic read!
Marcus and Cecelia are childhood best friends and grew up in the land of the Fae making promises about their future together. Over the past few years everything the Fae have known and grew up believing has changed. Marcus has always wanted a family and now that he has been reunited with his birth family he feels obligated to step into his rightful spot in society. In doing so he leaves his heart and true love behind. Will he realizes to late that he can’t live without her. Will she even give him another chance.
Cecelia is a stubborn, beautiful fairy and is not used to the rules of the British ton. She needed a break from life and is thrust back into the human world and into Marcus’s life. As they try to over come their past and make a future, will they survive an old enemy that wants revenge. A Must Read for sure!

I received an ARC for a honest review.

They are all stand alone but to really appreciate it its best to read them in this order.

Tammy Falkner lives on a farm in a lovely, sprawling little town in rural NC with her beekeeper husband and a house full of boys, a few dogs, and a cat or two (or five – who has time to count?). As half of the Lydia Dare team, she has co-written ten books, including the Westfield Wolves series and the Gentlemen Vampyre series. A huge fan of Regency England, she often wonders what other kinds of magical, mythical and strange creatures might live and interact within the ton. Exploring the theory that the fae can walk between Regency England and their own land, Tammy spends as much time as possible with the lords and ladies of society, horse-drawn carriages, and elegant balls. Now add to that some faeries, a little murder, a bit of mayhem, and a troublesome garden gnome, and you have her exciting new series. She hopes you enjoys her world as much as she does.

SYNOPSIS
When Charlotte Murphy escapes from the ruthless serial rapist and killer, Loverboy, she finds herself completely lost and scared to death. Lost, frightened, recovering, and in the sights of a brutal killer. In a most odd but clever tactic from the police, they assign Charlie 24/7 live-in protection; a move that is supposed to comfort her and make healing easier. Somehow, despite the odds, Charlie finds a refuge in officer Nick Andrews and in his arms she finds the strength to heal and the courage to move on with life. Nick finds everything that he wasn’t looking for in Charlie’s eyes and a fight against a killer that becomes personal. 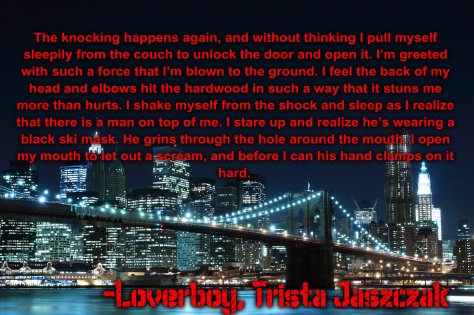 MEET TRISTA JASZCZAK
Trista Jaszczak (jazz-ick) is the author of the Believe series, retold, and upcoming relaunches, Loverboy, What Lies Inside and the Darkness Falls series. She is an Air Force spouse and mother to two mischievous and rambunctious little girls. She is originally from Hamilton, Ohio but calls home where ever the Air Force sends her. She currently resides in Anchorage, Alaska where she finds endless inspiration in the pure Alaskan wilderness. When she isn’t writing, she spends her time with her family in the vast Alaskan outdoors, plucking away at her old guitar or working on self improvement in the gym. She loves the outdoors, the moon, old movies and music. 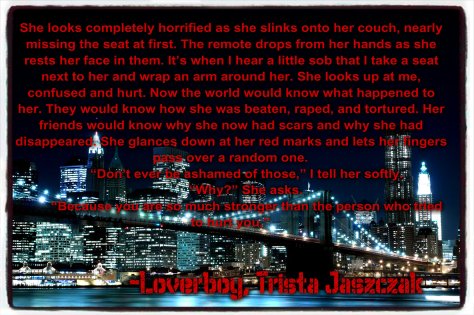