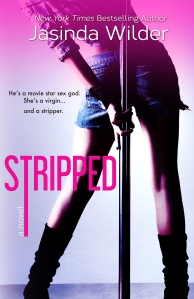 This was the first book I have read from Jasinda Wilder and I was not let down. This was one hot book! I am definitely going to read her back list books. It was one of those books that you felt like you were really there with them it was so well written! The first few chapters broke my heart and was such an emotional roller coaster. I didn’t want to put it down.
It’s a coming of age story about a Preachers daughter from Georgia. Grey has always lived by her fathers stricked rules. Her only escape was through her mothers love,dancing and her new-found passion for film. Due to life and unexpected circumstances she finds herself on her own in LA trying to work her way through college after her scholarship runs out. Not knowing what else to do she makes the decision to take the only job she can find even though it physically makes her sick.  She refuses to prove her dad right so as her last resort she takes a job as a Stripper. The shocker is she is a virgin! Then one night in walks Dawson Keller. Movie star, bad boy, sex god and their chemistry is scorching hot! They both know she doesn’t belong there. Then to her shock and his she becomes his assistant for his new movie while she is interning and working to get a full-time job with a movie studio. Grey is out of her comfort zone. How can she be enough for a man like him. He is more than she can handle but they both can not fight their attraction and growing love. She has so much emotion she is holding in and Dawson will not take No for an answer. He is used to not feeling anything and now that he has found Grey he wont let her go. Their story is one that will make you laugh, cry and jump for joy.  Two people from two very different worlds. Most would think they were wrong for each other but in reality they were made for each other. Will their love and passion overcome their differences and their past? This is one of those books that you will not forget. A must read for sure =)

Then, one day, I meet a man. He’s in my club, front and center. He watches me do my routine, and his gaze is full of hunger. Not the kind of desire I’m used to though. It’s something different. Something hotter, deeper, and more possessive. I know who he is; of course I do. Everyone knows who Dawson Kellor is. He’s People Magazine’s Sexiest Man alive. He’s the hottest actor in Hollywood. He’s the man hand-picked for the role of Rhett Butler in the long-awaited remake of Gone With the Wind.

He’s the kind of man who can have any woman in the entire world with a mere crook of his finger. So what’s he doing looking at me like he has to have me? And how do I resist him when he looks at me with those intoxicating, changeable, quicksilver eyes?

I’m a virgin, and he’s an American icon of male sexuality. I’m a stripper, and he’s a man used to getting anything and everything he wants. And he wants me. I know I should say no, I know he’s the worst kind of player…but what my mind knows, my body and my heart may not.

And then things get complicated.

New York Times and USA Today bestselling author Jasinda Wilder is a Michigan native with a penchant for titillating tales about sexy men and strong women. When she’s not writing, she’s probably shopping, baking, or reading.

​Some of her favorite authors include Nora Roberts, JR Ward, Sherrilyn Kenyon, Liliana Hart and Bella Andre. She loves to travel and some of her favorite vacations spots are Las Vegas, New York City and Toledo, Ohio. You can often find Jasinda drinking sweet red wine with frozen berries and eating a cupcake.